Government House possesses a rare and historically significant 19th century suite of dining room furniture, commissioned by the 11th Governor of New South Wales, William Denison (1855-1861) from Andrew Lenehan, a Master Cabinetmaker and supplier of furniture to the colony.

The collection includes 12 chairs of English manufacture, made of mahogany, and another 12 chairs, made in New South Wales, of Australian red cedar. All 24 chairs are of mid-19th century origin, impressed with the mark of the crown, with some retaining Andrew Lenehan’s maker’s label.

One of the largest collections of red cedar in Australia, the Government House dining room showcases these beautiful pieces.

The dining table (c1857) has 14 loose leaves of various sizes and two rectangular ends to change to a flat end instead of rounded. Of the 14, three are not original to the table and are later additions/replacements for damaged leaves. 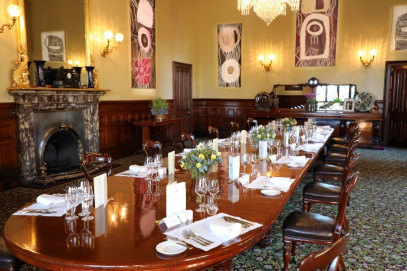 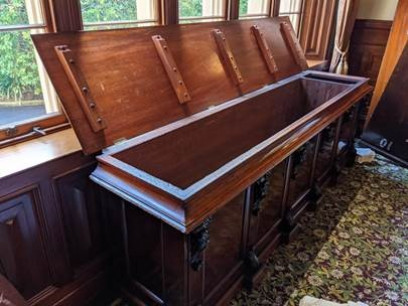 The sideboard (c1857) fills the western wall of the room measuring at over 3m long. Dining table leaves are stored in this sideboard.

The dumbwaiters are the oldest pieces dating to 1845. There are two currently in the house. Their counterweight action enables the separation of the top and bottom level forming three shelves. 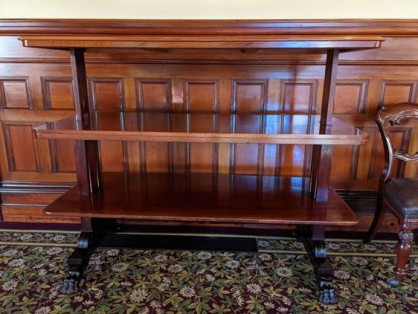 In addition, the Government House Collection includes a pair of carved armchairs in Australian red cedar (Toona ciliata) c 1840. These chairs are thought to be among the very few furnishings that were in the first Government House. The maker’s labels were found beneath the upholstery during restoration. 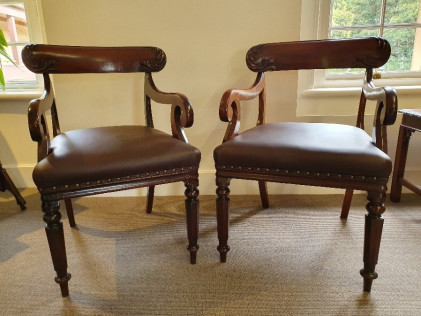 Born in Country Sligo, Ireland, Lenehan arrived in Sydney on 31 August 1835 on the Jane Goudie along with James Templeton, a Dublin Cabinet Maker. In 1841, he acquired Templeton’s cabinet making business in Castlereagh Street, also marrying a family member, Susannah Templeton. Working with Australian native timbers, including red cedar, as Lenehan’s reputation grew, his business expanded and he employed the most skilled craftsmen in the colony, including turners, carvers, gilders, decorators, French polishers, joiners, chair and bedstead makers and upholsterers (male and female). He was described by Governor FitzRoy (1846-55) as ‘an ingenious and reputable cabinetmaker’. He was also a Sydney Councillor from 1850-52.

Crafting furniture on commission for Government House and some of the finest houses in the early colony of New South Wales, Lenehan made a box thought to contain a gold sample from the Gold Rushes, which was presented to Queen Victoria.

The Royal Collection Trust describes it as: “An Australian box made from various woods from New South Wales. The lid has a crown-shaped handle and is veneered inside. The inside of the box is lined in blue velvet and contains a blue silk ribbon describing the woods used to make the box and a gold key decorated with Prince of Wales feathers. The inscription on the box reads: ‘THIS BOX/Manufactured from woods the produce/of the Colony of New South Wales/is humbly offered for the Acceptance/of Her Most Gracious Majesty/Queen Victoria/by Her Majesty's Loyal & Faithfull subject/Sydney 1851- Andrew Lenehan.’” 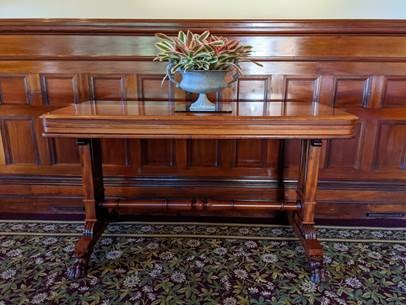