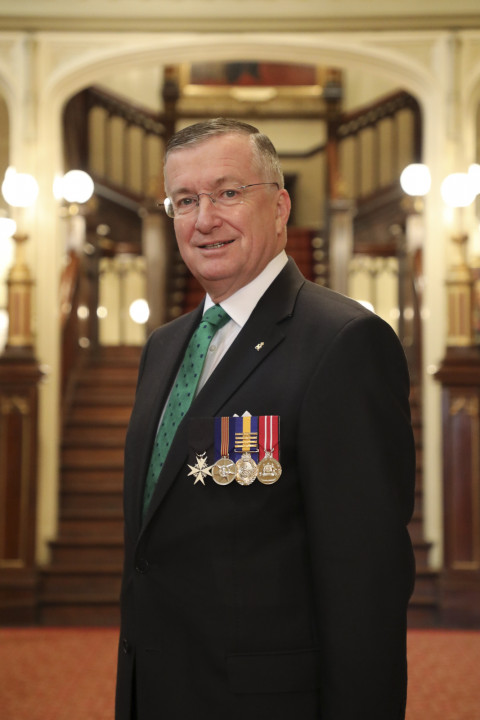 Colonel Michael Miller LVO RFD was appointed Official Secretary on 16 March 2015 and was sworn as Clerk to the Executive Council on 25 March 2015.

Born in 1959, he was educated at Ashfield Boys' High School and the University of Sydney, where he was awarded a Bachelor of Arts in 1980, having read History and Government. He also holds a Master of Education from the University awarded in 1984.

Michael has extensive background in protocol and Vice Regal service. He was previously an Aide de Camp to the Late Gordon Samuels AC CVO, Governor of New South Wales from 1996 to 2000. He was also Honorary Comptroller and Military Secretary to Dame Marie Bashir from 2001 to 2006.  Michael was an Honorary Aide de Camp to three Governors General from 2007 to 2015 and was awarded the Centenary Medal in 2002 for ‘service to the Governor and people of New South Wales’ for his work in the Vice Regal Household.

Michael has more than forty years’ service in the Australian Army; both as a Reservist and Regular Army Officer. He was commissioned in 1981 having completed his officer training in Sydney University Regiment.  Highlights of his military service include being the Commanding Officer of the 5th Combat Service Support Battalion and Commandant of the Land Warfare Centre (NSW).  Following Service in the Regular Army, Michael followed a career in Aviation Security and Emergency Planning. From 2001 until 2007, he was Manager - Emergency and Special Operations for Sydney Airport Corporation prior to being the National Security Manager for Airservices Australia, the Commonwealth Government authority responsible for air space management.

Michael was appointed as a Lieutenant of the Royal Victorian Order in His Majesty The King’s 2023 New Year’s Honours List.