Stonework Heraldry - A link from the past to the present

In the late 1830s, Architect Edward Blore included in his specifications for the new Government House that:

'…the panels between the ground floor and bed room windows of the North and East fronts to be moulded and filled in with carved work or the Governor’s Arms and supporters as may be hereafter decided.'[1]

Following medieval tradition, a full coat of arms is known as an ‘achievement’.  It consists of a Shield surmounted by the Mantle (cloak-like device flowing from the Crest), the Torse (or wreath atop the helm to support the crest), the Helm (or helmet) often mounted by a Coronet, the Supporters (usually two animals or people who ‘hold up’ the shield) and a Motto. 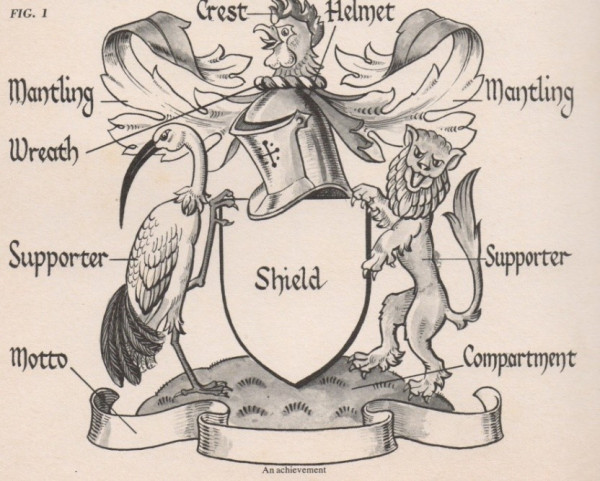 The first sculpted sandstone coats of arms of Governors began to be added to the house in 1853, eight years after its completion. Under Governor FitzRoy, an allocation of £125 was made for “carving Shields of Arms and Ornament of the Pannels (sic) in the South and East sides”[2]and expenditure against this is recorded in the Schedule of Returns in 1854.

This resulted in the coats of arms of Governors FitzRoy and Bourke being installed on either side of the entry porch facing South. 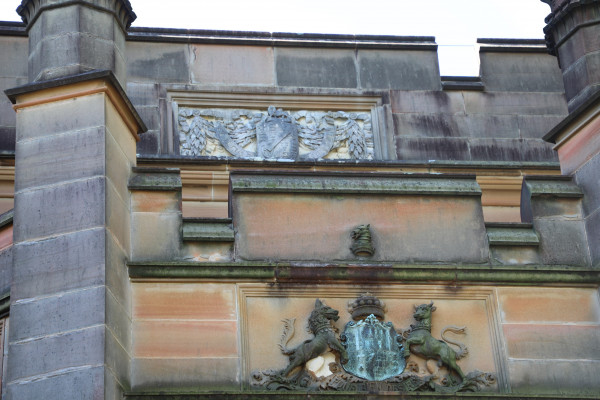 Coat of Arms of Governor Fitzroy (top) and Governor Hampden (below) 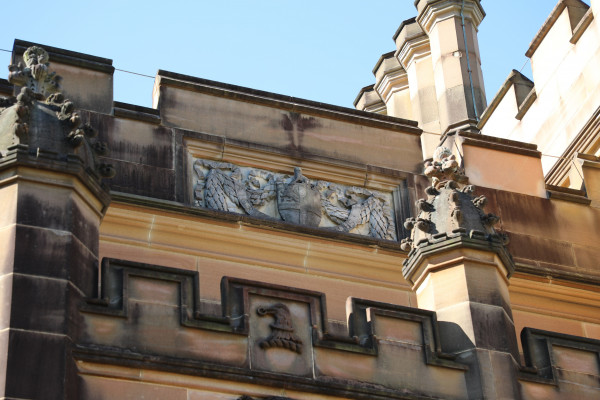 There is a mystery surrounding the coat of arms of Governor Gipps, the first resident Governor of Government House.

The history of the House doesn’t reveal whether he was honoured in the work commissioned by FitzRoy.  If he was, we don’t know what happened to his coat of arms. Perhaps they were located on the East side and removed - or covered when the Arcade was installed in 1879.

What we do know is that it was not until 1974, that the Gipps coat of arms appeared, or perhaps re-appeared, on the western facade. The “Gipps Gap” to which we refer this ‘missing’ period of time, was potentially, 121 years, counting from the commission of FitzRoy to 1974.

Following FitzRoy’s commission, the practice of honouring Governors with carved coats of arms continued unbroken until the time of Sir Walter Davidson in 1924. Exterior sculptured coats of arms representing each Governor were re-introduced in 1974 when all missing Governors’ coats of arms were retrospectively added. However, that tradition was again suspended in 1996 when, for a period of 17 years, Governors ceased to reside at Government House.

Now that the Governors are again resident in Government House, the tradition of displaying coats of arms at Government House has been reinstated with each Governor receiving a coat of arms following the end of their term.

With the installation and unveiling of the coat of arms of Governor Samuels on 12 November 2019, there remain two coat of arms of previous Governors to be installed – those of the 37th and 38th Governors of New South Wales, Governor Bashir and Governor Hurley.

Making and installing the Coat of Arms

The process of creating the exterior coat of arms of The Honourable Gordon Jacob Samuels AC CVO QC, 36th Governor of New South Wales (1996-2001), began in 2017 with sketches initiated within the NSW Department of Public Works. These aimed to transfer the portrait orientation of the indoor coat of arms to the landscape and dimensional orientation required for the exterior.

There is rich symbolism in the Samuels coat of arms with its resounding motto “Let Justice Be Done.”

'The helm is standard for a gentleman of his rank. The crest of the helm is that of New South Wales, but is differenced by the waratah, which symbolises Samuels’s role as Governor. The shield incorporates the maces of both the University of New South Wales and New South Wales Parliament and also features the Shield of David. The supporters are a kangaroo and the Lion of Judea. From their necks hang, respectively, a book, the symbol of learning or knowledge, and the scales of justice, representing the law. Below the shield are the Companion of the Order of Australia and the Commander of the Royal Victorian Order.'[3]

Several iterations of sketches were exchanged between the Government House Estate Manager and the NSW Department of Public Works before making a full-size clay model in the workshop in Alexandria. Following the decision on which sandstone stock to use, the fine sculpting of this wonderful work began. 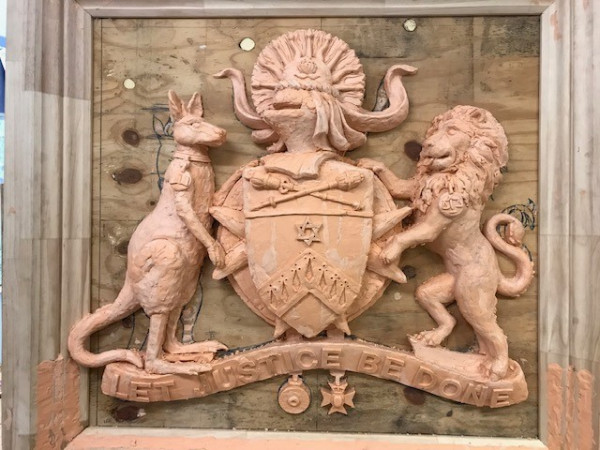 In July 2019, the finished Governor Samuels’ Coat of Arms was installed with the help of a Hiab crane mounted on the back of a truck. Navigating the archway of the Arcade and then tipping the stonework up to fit into its place was not an easy task! 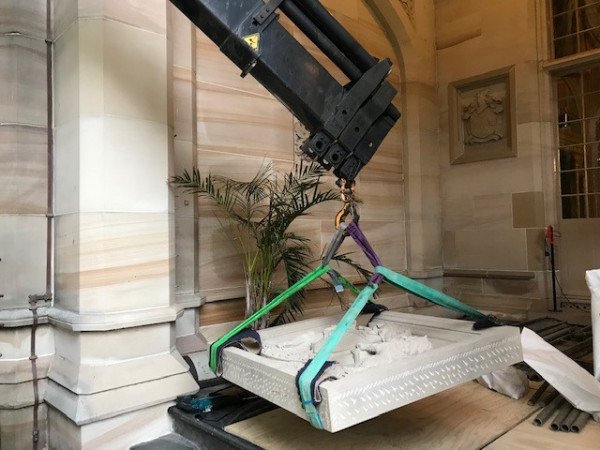 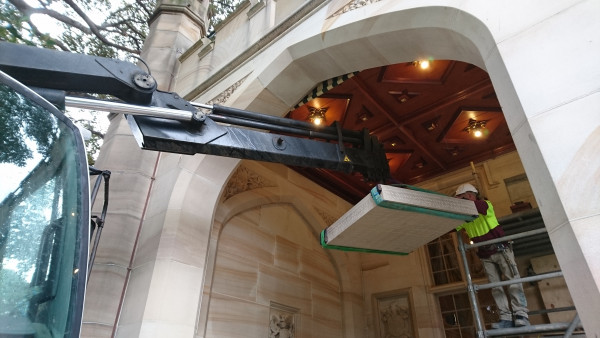 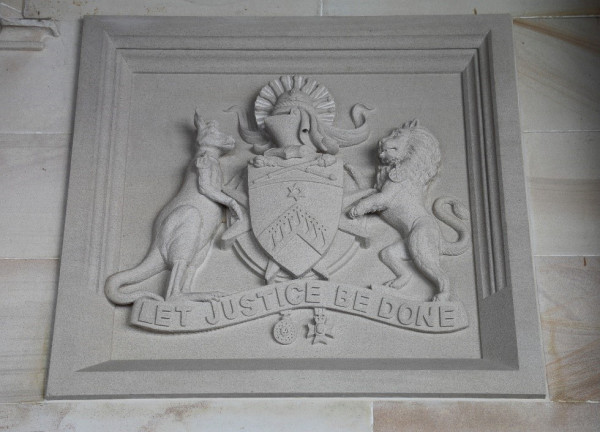 ‘Man this is a gran’ kintra for stane’

Stonemasonry has a long and continuous tradition in New South Wales that stems from the early days of the colony and the need to hew and craft the sandstone upon which the settlement was built. The highly skilled craft of Sydney sandstone stonemasonry reached its peak in the 1830s following advertisements placed in British newspapers for emigrants to New South Wales with stonemasonry and stonecutting skills among the preferred trades.

‘One of the stonemasons contemplating the scene on entering the noble harbour, and observing the abundance of first rate material … observed in ecstasy to a fellow countryman: ‘Man this is a gran’ kintra for stane.’ (Man, this is a grand country for stone).[4]

In New South Wales, today, it is thought there are less than 100 fully qualified sandstone stonemasons, refining their craft, using both traditional and modern tools of the trade.