Government House is proud to announce a showcase of Indigenous art by award-winning Yolngu artist, Nongirrna Marawili in the Dining Room.

Nongirrna Marawili was born c. 1939 and lives and works in the community at Yirrkala, Arnhem Land in the Northern Territory.  She has strong connections to both the inland area of Wandawuy through her husband and through her own family to Tathikpa and Baratjala.[1]

Both a painter and printmaker, Marawili learnt how to paint on bark in the 1990s while assisting her late husband, Djutjadjutja Munungurr, a Djapu man, with his artwork. In her own practice, she incorporates elements from her Madarrpa heritage, learned from the stories shared with her by her father, Mundukul Marawili, as well as those of her late husband.

Her first significant exhibition was in 2013 at the Alcaston Gallery in Melbourne, titled ‘And I am still here’.  This was followed in 2015 by ‘All watched over’ at the James Cohan Gallery in New York.  In 2017, Marawili was featured in several exhibitions in Australia including ‘Defying Empire: 3rd National Indigenous Art Triennial’ at the National Gallery of Australia; ‘Who’s Afraid of Colour’ at the National Gallery of Victoria and ‘TARNANTHI: Festival of Contemporary Aboriginal & Torres Strait Islander Art’ at the Art Gallery of South Australia.

More recently, Nongirrna Marawili was selected to participate in NIRIN, part of the 22nd Biennale of Sydney.  In 2021, her work will be included in a major exhibition at the National Gallery of Australia, Canberra featuring ‘Australian Women Artists 1900 to Now’. [2]

The works on display in the Dining Room of Government House Sydney are on loan from the Collection of Mr Geoffrey Hassall. 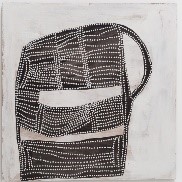 Medium: Ochres and fixative on board

Developed from a series of paintings completed in 2012, this work evokes the precious times of family contentment.  With happy joking and teasing after families have gone hunting they sit by the fire, cook and chat and drink cups of tea.

Medium: Earth pigments and recycled print toner on composite board

Baratjala is a Madarrpa clan estate adjacent to Cape Shield whose cyclonic weather, crocodile infested waters and huge ripping tides have influenced Nongirrna.  In Madarrpa culture the ‘lightning snake’ a Burrut’tji (water python or serpent) who lives deep beneath the sea spits lighting into the sky.  Some of the design work is influenced by the rocks set in deep water between the electric ‘curse’ that the snake spits into the sky.

Many of Nongirrna’s designs show rocks set in deep water between the electric ‘curse’ that the ‘lightning snake’ spits into the sky, and the yurr’yunna (spray of the sea) trying to shift the immovable rock foundation of the Madarrpa.

Medium: Earth pigments and recycled print toner on composite board

Like most of the works, this work is painted on a piece of stage board originally used by the Bangarra Dance Theatre for a production in Yirrkala.  The production was a thank you to the Yirrkala community for their generosity in sharing sacred dance with Bangarra.  Stephen Page, Bangarra Director, suggested the boards as art materials.

This work is one of a few where Nongirrna experimented with using magenta pigment. Nongirrna had obtained a discarded print toner and extracted the colour from the cartridge. In many ways the modern adaptation of using printer toner to form mediums, echoed the long-established traditional practices of using natural pigments sourced from the environment.

A distinctive work for its pared-back design and minimal use of crosshatching.

Many works show the maypal (shellfish) which adhere to the rock and the dungurnaniny (barnacles) which nibble on the feet of the oyster gatherers while they perch atop these rocks. 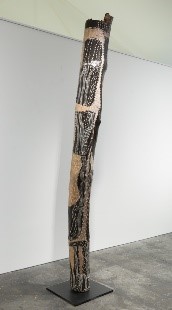 Natural earth pigments on hollowed log with custom made base

(Located in the Outer Hall)

This artwork is a Larrakitj or ceremonial pole. The Yolngu (Indigenous Australians living in north-eastern Arnhem Land) use Larrakitj to contain the bones of their deceased during mortuary ceremonies. Since the 1980s many Yolngu artists like Nongirrna Marawili have begun making Larrakitj for the art market.  The non-ceremonial production of Larrakitj has promoted further education and understanding of Indigenous culture and customs. Baratjala is a Madarrpa clan estate located in Arnhem land.