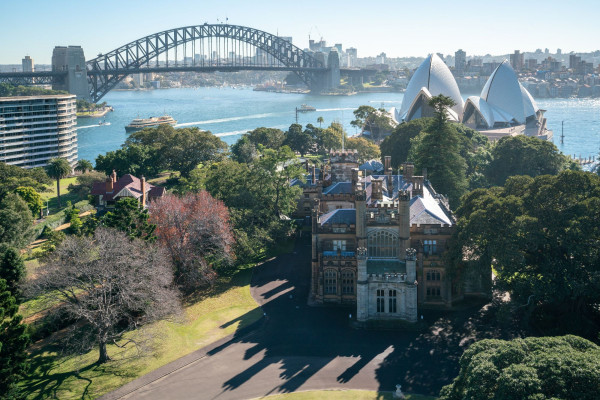 Like many houses, Government House Sydney underwent (and continues to undergo) changes to improve both aesthetics and amenity. As necessary, alterations have adapted an essentially European architectural model to a unique Australian climate and environment.

The first of these changes in the late nineteenth century set out to resolve a re-interpretation of Royal Architect Edward Blore’s original design, which had been communicated to Colonial Architect and supervisor of works, Mortimer Lewis via 97 working drawings.

Blore had never visited the colony and his designs specified a grand entrance to the House from the magnificent harbour. Lewis, and Colonial Engineer, Captain George Barney, given the responsibility for the construction of the House according to the plans, decided to site Government House to orientate the entrance to the south.

The reasons for this become clearer in the Select Committee report on the proposed new Government House, dated 12 August 1836: to provide 'extensive view of the harbour and Port Jackson, and the adjacent scenery; it will present an imposing aspect from the harbour, and highest points of the town of Sydney;  it is healthy in every respect, and will be sheltered from the obnoxious winds in the seasons of summer and winter; _well adapted for adequate drainage and an abundant supply of fresh water; it will have the advantage of about 50 acres of surrounding pleasure grounds.'

The report concluded: 'In recommending this scite your committee have had in view not merely the suitableness of the spot for an official residence, combining style, health, convenience, and eligible locality, but have also contemplated public convenience both for business and pleasure, and have had an anxious regard to an economical expenditure of the Colonial funds, whilst at the same time they have not been unmindful of the growing prosperity and importance of the town of Sydney, as the seat of Government.'[1]

The uncovered southern entry, however, proved to be a problem to guests arriving and departing in horse-drawn carriages during inclement weather and the frequent Sydney southerly busters. Continuing budgetary constraints delayed any rectification works until 1872 when Lieutenant Governor Sir Alfred Stephen - who acted as administrator - hit upon a solution: a grand porte-cochère[2] would be constructed across the southern entrance.[3] 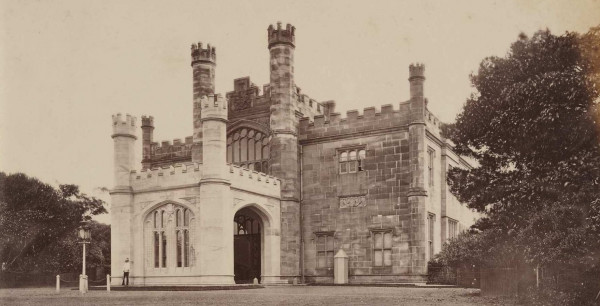 Colonial Architect, James Barnet designed the porte-cochère to repeat the sandstone Gothic styling of turrets and battlements surrounding the Tudor-styled arch of the entrance porch with several distinct decorative additions: the large plate-glass windows were set within stone tracery windows, below which was an elaborate red-cedar screen.

The front façade of the porte-cochère featured plate glass windows and panels of finely carved heraldic floral motifs. The centre of the interior canopy featured the St Edward’s Crown, symbol of the Sovereign, and corners were inset with foliage and animal forms in the Gothic style. Amid the archways was the date of completion, 1873.[4] Prominently situated was the coat of arms of incumbent Governor Sir Hercules Robinson, and his motto: ‘Legi régi fidus’ (‘Faithful to the law and the king’). Less prominently situated, on the inside, was that of Lieutenant Governor Sir Alfred Stephen.[5] 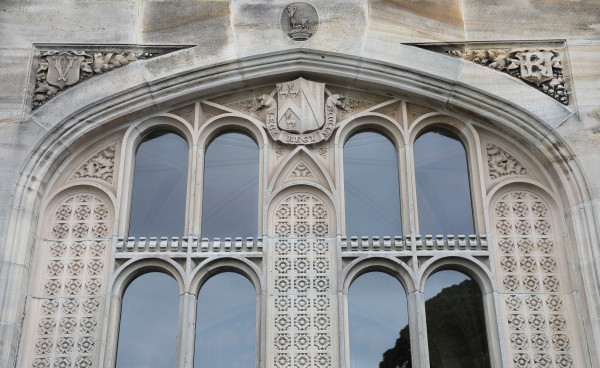 Above: Detail of Porte-Cochere external facade

In 1861, a raised sandstone verandah walkway was constructed on the eastern side of the House linking the State Rooms to the Eastern Terrace garden. The design for the Eastern Terrace gardens had commenced during the term of Governor Denison (1855-61). Upon completion by Governor Young (1861-67) in 1861, the garden’s formal design and plantings reflected both English and Italianate influences. Successive Governors and their wives displayed keen interests in botany, also consulting with the then Director of the Botanic Gardens,[6] Charles Moore. 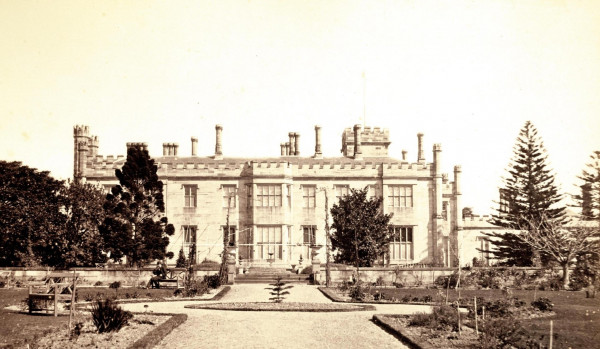 The popular taste for tropical foliage was reflected in the palm fernery, created at the northern end of the Eastern Terrace following a gift of ferns, in 1868, to Lady Belmore, who disliked the summer heat.[7]

The second major design addition to the House was the creation of the Arcade on the eastern side to filter a blazing summer sun and reduce its impact on the State Rooms and furnishings. Blore’s designs, in accordance with the European style, had indicated internal shutters but these, too, had been abandoned in the House’s construction. Temporarily, outside awnings were used but these proved inadequate as a longer-term solution.

Once more, Lieutenant Governor Alfred Stephen stepped in. Writing to Premier Sir Henry Parkes, Stephen proposed that work commence immediately on a ‘corridor or colonnade along the seafront of the building’ - before the arrival of the new Governor, Lord Augustus Loftus and the opening of the Sydney International Exhibition in 1879. He continued: ‘The effect of the present range of windows and the bald state of the entire line is mean and factory like. The additions … will give grandeur, with comfort and usefulness.’[8]

The Arcade, as it came to be known, would connect the House to the Eastern Terrace gardens and provide a place for repose and outdoor entertainment, increasingly important as New South Wales primed itself in readiness for the world’s attention with the opening of the 1879 Sydney International Exhibition at the Garden Palace.[9] 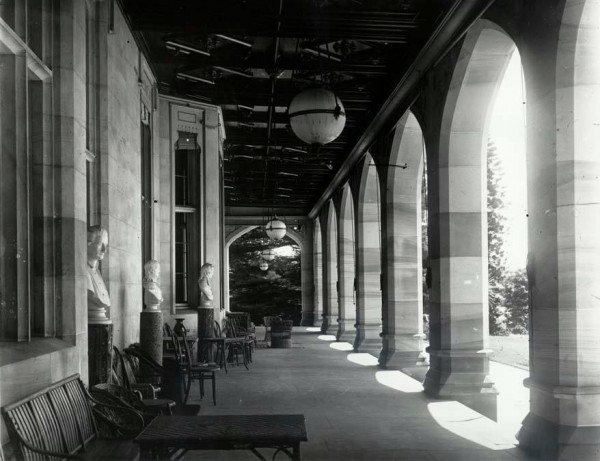 Above: The Arcade c1890: courtesy NSW State Archives and Records

[2] A porte-cochère (meaning gateway for coaches) is a covered entrance large enough for transport to pass through, typically opening into a courtyard. Deriving from the late 17th century, the entrance enabled a horse and carriage to arrive and depart and occupants to disembark with protection from the elements. An example in the United Kingdom can be found at Waddesdon Manor in Buckinghamshire, built between 1874 and 1889.

[9] The Garden Palace (on the site of present Royal Botanic Garden) saw up to 24,000 visitors attending the Exhibition on the opening day of 17 September 1879, and over 1.1 million people visited during its seven months of operation. The Garden Palace was engulfed by fire on 22 September 1882, destroying the whole building and its significant collections.