On 18 August 1786, with mounting pressure on Britain’s Pitt Government to find a solution to the “convict problem” and the shortage of prisons to house them, the British Government issued instructions to the Treasury to provide funds for the establishment a convict colony in faraway Botany Bay. Two months later, on 12 October 1786, Captain Arthur Phillip was given his first Commission appointing him “Governor of our territory called New South Wales”. 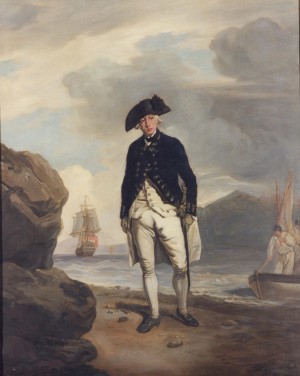 Frank Moss Bennett (after Francis Wheatley), Captain Arthur Phillip (1937): For the sesquicentenary of British settlement in 1938, a copy of the portrait of the first Governor, Captain Arthur Phillip (1788-92), was presented to Government House by the Royal Empire Society. This copy was made from the original portrait painted in 1786 before Governor Phillip departed for the colony.

The First Commission was a simple document. It read as follows:

“We, reposing especial trust and confidence in your loyalty, courage and experience in military affairs, do, by these presents, constitute and appoint you to be Governor of our territory called New South Wales, extending from the northern cape or extremity of the coast called Cape York, in the latitude of 10 degrees 37' south, to the southern extremity of the said territory of New South Wales or South Cape, in the latitude 43 degrees 39' south, and all the country inland and westward as far as the one hundred and thirty-fifth degree of longitude, reckoning from the meridian of Greenwich, including all the islands adjacent in the Pacific Ocean, within the latitude aforesaid of 10 degrees 37' south and 43 degrees 39' south, and of all towns, garrisons, castles, forts and all other fortifications or other military works, which now are or may be hereafter erected upon this said territory. You are therefore carefully and diligently to discharge the duty of Governor in and over our said territory by doing and performing all and all manner of things thereunto belonging, and we do hereby strictly charge and command all our officers and soldiers who shall be employed within our said territory, and all others whom it may concern, to obey you as our Governor thereof; and you are to observe and follow such orders and directions from time to time as you shall receive from us, or any other (of) your superior officer(s) according to the rules and discipline of war, and likewise such orders and directions as we shall send you under our signet or sign manual, or by our High Treasurer or Commissioners of our Treasury, for the time being, or one of our Principal Secretaries of State, in pursuance of the trust we hereby repose in you.

Given at our Court at St James's, the twelfth day of October 1786, in the twenty-sixth year of our reign.
By His Majesty's Command
SYDNEY.”