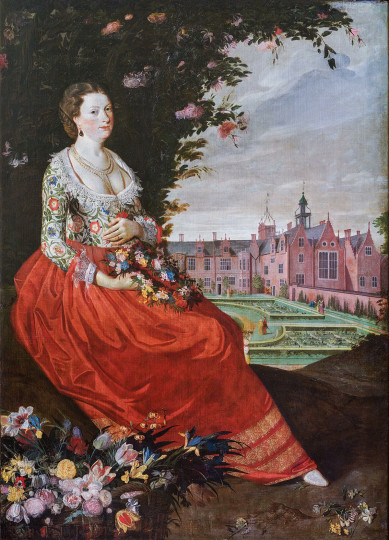 Government House’s very own ‘Art Detectives’ mystery has finally been solved with the publication of an article by Professor Karen Hearn FSA on 1 July 2022 in The Burlington Magazine, the prestigious London-based international art journal.

The provenance of the Government House portrait hitherto attributed as The Lady Santry by artist Angelica Kaufmann (1741-1807), an 18th century Swiss neoclassical painter, had been in doubt.

A trail leading back to 1930 questioned the attribution of the artist and subject. That question was raised again in 1952 by further news articles: 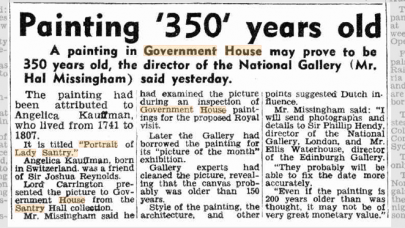 In advance of the 1954 Royal Tour by Queen Elizabeth II, the Director of the National Art Gallery of New South Wales inspected the painting and conducted enquiries with UK galleries. As a result, a black-and-white photograph of the portrait in the Heinz Archive and Library at the National Portrait Gallery in London, stamped with the date ‘1952’ had the original annotation in ink on the back ‘attributed to Angelica Kauffman (1741–1807)’ amended in pencil to ‘early 17th century Flemish’.[1]

Enter several key players in this fine art mystery. In autumn 2019, just before the pandemic hit, Tim Knox, Director of the Royal Collection Trust at St James Palace visited Government House. Attracted to the Lady Santry portrait in the Ante-Drawing Room, he speculated that the artwork bore similarities to the work of the early 17th century British painter, Sir Nathaniel Bacon (1585-1627), nephew of the great writer, philosopher, statesman and gardener, Sir Francis Bacon (1561-1626). 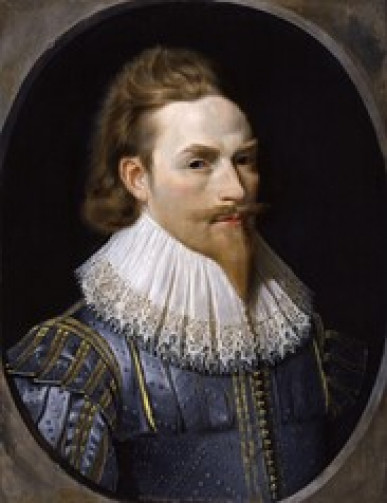 On his return to the UK, Tim Knox sought the professional advice of Karen Hearn, Honorary Professor, Department of English Language and Literature, University College London, the curator of the only known exhibition of Bacon’s work: Nathaniel Bacon: Artist, Gentleman and Gardener, held at the Tate Britain Gallery in 2005-06.

Karen asked that The Lady Santry be professionally photographed for her review. The Sydney art conservators, David Stein and Co submitted photographs and a condition report. Further invaluable research and information were provided to Karen by the Government House Estate team.

In addition, an historian and former curator at Government House made her research available.

As Government House eagerly awaited Karen’s assessment, a close-up inspection of sections of the portrait revealed beautiful and historically interesting details in both the subject and the distant figures:

Importantly, it revealed a similarity in style and subject with another Nathaniel Bacon portrait: 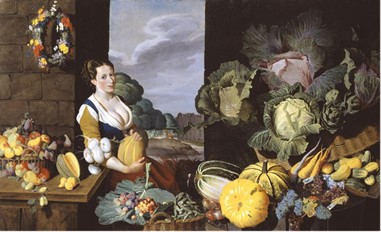 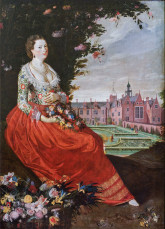 With the publication in July 2022 of Karen’s article “A newly identified portrait by Sir Nathaniel Bacon” in The Burlington Magazine, the decades-long mystery of who is the enigmatic woman and who painted her has been solved. And - as part of that revelation - further fascinating secrets have been unveiled.

“Undoubtedly by Bacon, the painting is a significant work in a number of ways. It adds one more to the small number of known surviving works by this remarkable and distinctive artist. It includes an early painted representation of an identifiable English country house (and garden)[1] – most such views date from the 1670s onwards – and is valuable as a depiction of a house that no longer survives. Moreover, the sitter is depicted as visibly pregnant – historically, an unusual form of presentation but one that seems to have been fashionable in Elizabethan and Jacobean Britain and it thus joins the small corpus of British ‘pregnancy portraits …”[2] 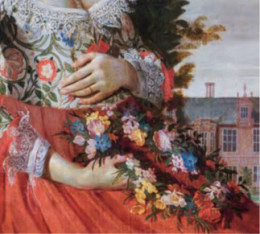 “Nathaniel Bacon’s remarkable c.1614–17 portrait of his pregnant wife, Jane, depicted seated outdoors in the garden of the couple’s residence, Brome Hall, Suffolk, was effectively hiding in plain sight, thousands of miles from where it had been painted. Its rediscovery by Knox not only adds a further major work to Bacon’s known oeuvre, but also, in its careful depiction of Brome’s buildings and garden, adds yet another innovative genre – architectural painting – to the ones explored by this amateur artist … Because his surviving oeuvre is so small, Bacon is comparatively little-known today, but the addition of this second remarkable full-length portrait shows that, if he had chosen to, he could certainly have competed with the most accomplished professional portraitists of his day.”[3]

The Burlington article was welcomed by Government House staff who had been researching the artwork:

“A number of us in the Estate team trawled through websites and old photographs of the House to see if we could help solve the mystery of “Is she … or isn’t she?” It was exciting as well as fascinating to be involved in the mystery. And now the question is solved. Our former Lady Santry is now Lady Jane Bacon – wife of the artist Nathaniel Bacon. It is believed to be only the 10th known painting of Nathaniel Bacon in existence – painted in the early 1600s.” 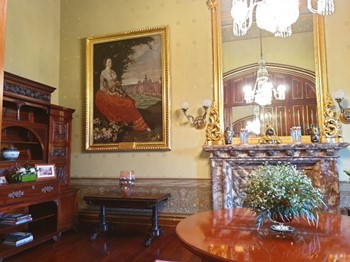 Now “Jane, Lady Bacon” in situ in the Ante-Drawing Room

A deepening mystery surrounds the movement of the portrait from its possession by the artist and his wife to its arrival in Australia. It is thought to have been purchased by Governor Carrington (1885 - 1890) as a gift to Government House during the Sydney auction of great artworks of the Irish estate, Santry Court, in May 1889. This may explain at least part of the auction house’s attribution.

The only direct link between the Bacon and Cornwallis families (into which Jane had entered via her first marriage to Sir William Cornwallis) and Ireland, uncovered via Karen Hearn’s research, is that of a descendant, Charles Cornwallis, 1st Marquess Cornwallis (1738-1805) who was Lord Lieutenant of Ireland 1798-1801, dying as Governor-General of India in 1805.

“We ran up the wide staircase. Half-way up, the stairs divided to right and left, and on the wall at this junction of the two flights was a large portrait of a lady in evening dress. We would have dashed on had it not been for her name neatly printed on the bottom of the frame. It caught our eye and made us giggle: 'The Lady Santry'.”

[1] Karen Hearn points out that the House in the painting is clearly Brome Hall, Suffolk, which Bacon’s wife Jane had inherited from her first husband, Sir William Cornwallis. It was the Bacons’ house throughout their marriage.