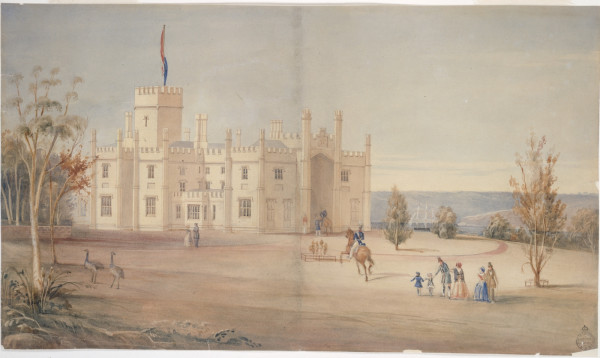 “The move to the new Government House was gradual.  Beginning with a flag raising on Queen Victoria’s birthday, for the two years following, the official presence at Government House was restricted to the (Queen’s) Birthday Ball … held in the House on 24 May 1845, (with) Governor Gipps and his Lady taking up residence there in June.”[1]

On 24 May 1842, in celebration of Queen Victoria’s birthday, the national flag of England, St George’s Ensign, was raised on the main tower of a not-yet-complete Government House.

As early as 1841, while still under construction, it had been reported in The Sydney Herald:

“This fine edifice which well merits, and ought to be, and must, henceforth be called the PALACE is … by far the most elegant in point of taste, as it is most spacious in point of extent in the colony … the chief architectural gem of Australia.”[2]

The genesis of the plan for a new Government House stemmed from the time of the 5th Governor, Governor Macquarie (1810-21), who had petitioned the British Government for funding. It had been clear to Macquarie that the growing settlement needed a new and more expansive Government House, fitting of the status of the colony.

The cause was further prosecuted by Governor Bourke, 8th Governor of New South Wales, (1831-37) who, following Governors Macquarie and Darling, proposed the site of the present Government House grounds, the sale of lands below the first Government House as finance and who ensured its eventual success by suggesting Britain select an eminent London architect.

With funding finally received, construction began in 1836, following the design and 97 working drawings of Edward Blore, architect to William IV and Queen Victoria, who had recently undertaken to complete the work of architect John Nash at Buckingham Palace, and who also worked on Hampton Court Palace and Windsor Castle.

Influenced in its location by the existing Governor’s Stables, which was completed by Francis Greenway in 1821 (now the Conservatorium of Music located at the main entry gates to Government House), the new Government House was also designed in the Gothic Revival style, characterised by castellated towers. While the edifice would mimic the palaces of London, the construction would be distinctly ‘New South Wales’. Locally quarried sandstone, and cedar and marble, obtained from regional areas of New South Wales, provided the construction materials for the new Government House and newly arriving immigrants - stonemasons and tradesmen – would supply the labour. Mortimer Lewis, who oversaw the construction, estimated the number of tradesmen needed as: ‘5 painters, 5 glaziers, 5 plumbers, 10 plasterers, 4 diggers, 60 masons, 20 carpenters, 40 joiners, and 7 shinglers.’[3]

After several delays due to the economic depression of the 1840s, which conflated the cost to the princely sum of 46,000 pounds, in June 1845, the new, but sparsely furnished, Government House was almost complete. In its grand solidity, Government House represented the authority of an imperial power yet, just as significantly, of a colony which had moved beyond its penal settlement origins.

In summing up the achievement, Thomas Braim, in his A History of New South Wales from Its Settlement to the Close of the Year 1844, declared: ‘May the solidarity, the splendour, and elegance of this vice-regal mansion be an emblem of Australia’s future history.’[4] 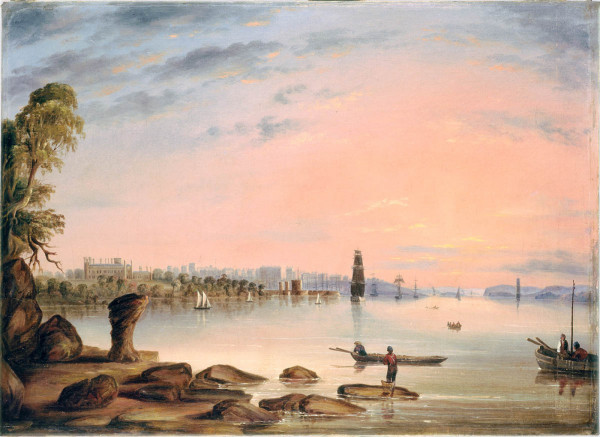 [2]The Sydney Herald 20 February 1841, quoted in R Gillespie, Viceregal Quarters: an account of the various residences of the Governors of New South Wales from 1788 to the present day, 1975, in Government House Sydney, Ann Toy and Robert Griffin, Historic House Trust, page 33