Just over a year ago, the Vice Regal household’s Vanilla Orchid was in bloom!

This was a rare, precious and beautiful botanical event, as Vanilla Orchids are extremely difficult to pollinate. No wonder they are the second most expensive spice after saffron! 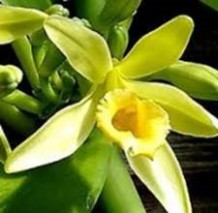 A small propagation staff team, led by our Government House Florist, was summoned with the delicate task of hand-pollinating each flower, with the hope of fertilizing them. 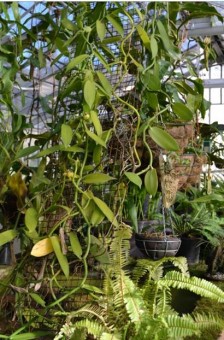 The Vanilla plant in the Glasshouse

Of the 3 pods successfully pollinated by the Government House team, only 1 survived to maturity! 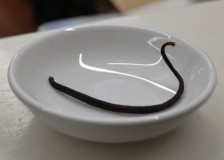 Our Government House Chef was delighted to have this lone home-grown vanilla pod available for a special occasion! 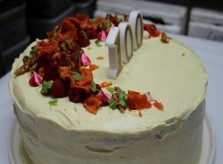 From the 45 or so blooms, we again successfully pollinated four in November 2018. As it takes six months for the beans to grow till maturity, then a further 6-8 weeks to ripen post harvesting to become consumable, we can expect Vanilla-flavoured desserts on the Government House menu later this year. 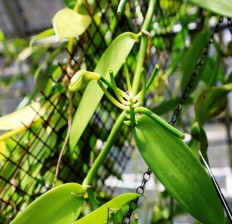 Vanilla Orchids are one of the most precious of Orchids and native to Meso-America. In the wild, the Melipona or mountain bee and sometimes hummingbirds take care of the pollination.  As neither of these creatures has successfully been able to relocate to other parts of the world, outside of Meso-America, growers need to hand-pollinate in order for the pod to form.  Today, most commercial vanilla is grown in Madagascar and Indonesia and is all hand-pollinated.

Push up the anther and remove pollinia. Press the yellow pollen mass out and hold it firmly with the right thumb and right index finger so it won't fall off. With the right middle finger push the anther back to raise the cap underneath it. Then with the left thumbnail peel down the front of the column about one-quarter of an inch.

With the right thumb and index finger place pollen on ridge, push peeling back in place with left hand and cap down on top of it with right hand. By the second day the stem turns downward and begins to elongate. Flowers do not fall off, but wither to dark brown. The best time of day to pollinate is between 11 am and 12 noon. Earlier in the day the pollen is less ripened and very hard to handle or place on the column.