I, too, pay my respects to the Gadigal of the Eora Nation and Elders and servicemen and women, past and present.

Two radio announcements made to the entire nation by the respective Prime Minister of the day could not have been more important or more different.

On 3rd September 1939, at 9.15 pm, just as people were preparing for bed, Robert Menzies advised “Fellow Australians” that it was his “melancholy duty to inform” them that “Australia was at war”.[1]

Six years later, on Wednesday, the 15th August 1945, and exactly 75 years ago today, at just after nine in the morning as the Australian population was commencing the day’s work, these words of Prime Minister Ben Chifley resounded on wirelesses around the nation:

“Fellow citizens, the war is over ... let us remember those whose lives were given that we may enjoy this glorious moment and may look forward to a peace which they have won for us …

Nothing can fully repay the debt we owe them …”[2]

The announcement of Japan’s acceptance of the Allied demand for unconditional surrender was the signal for a spontaneous national outpouring of jubilation. Where we are today at the Cenotaph became a rallying point for people to celebrate, spilling over into Pitt, Park and George Streets. My mother Lorna was one of them, captured in the photograph on display at the ANZAC Memorial in Hyde Park. 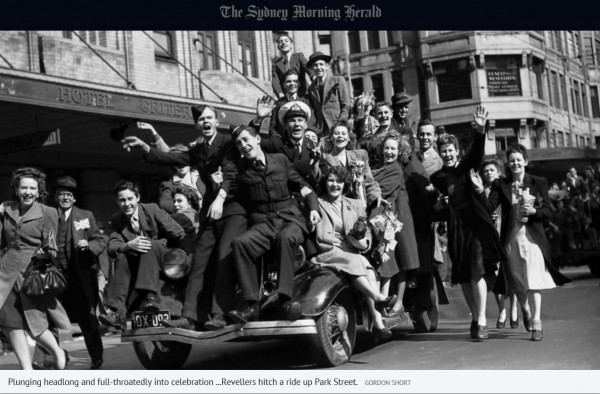 Across Australia, the Pacific and the rest of the world, news filtered through to exhausted servicemen and women. Among them were our special guests at this morning’s commemoration:[3]

We are deeply honoured by the presence of each of you at today’s 75th anniversary commemoration of what has become known as Victory in the Pacific Day. Your service represents the service of all Australian and Allied men and women to whom, in Chifley’s words, we owe a ‘a great debt of gratitude.’

Almost one million Australians enlisted in the war in the years between 1939 – 1945 - approximately 1/7th of our entire population.[5]  It had an enormous impact on our nation.

No family, sector or region was left untouched by this war.  Indeed, several of our cities and towns bear the marks of attacks on our home soil.

No war is pretty, not the least this war, as we are reminded by the words of Gunner Lindsay Dufty, who couldn’t be here with us today. In a 75th anniversary interview, he reflected: “My war was not glamorous, far from it. I cannot think of any period in those years on which I can look back with pleasure. Just one small corner, in a global conflict which cost many lives and robbed many young people of their best ‘growing up’ years.”

This was a time in our history when all Australians played their part:

> Those who fought in each of our three services, including Aboriginal servicemen and women, amongst them Australian poet Oodgeroo Noonuccal whose two brothers were captured at the fall of Singapore.

> The women who served including: Private Dorothy Curtis from the Australian Women’s Army Service and Aircraftwoman, Margaret Ferrier, a flight mechanic in the Women’s Auxiliary Australian Air Force, who are both unable to join us today;

> The Australian Women’s Land Army, endorsed in 1943 by the Australian Cabinet as an “official fourth service”;[6]

> The Torres Strait Light Infantry Battalion, the only fully Indigenous battalion within the Australian Army;[7]

> Those at home, who maintained the economy, kept the social fabric of society going - and who waited; and

> The Royal Australian Army Medical Corp and the Australian Army Nursing Service; “the importance of medicine recognized as an enabler to successful military operations”.[8]

Immediately to the north, the assistance of our Papuan, New Guinean and Timorese friends was indispensable. One of the most enduring photographs of the Pacific war is of a blinded Australian soldier being guided to safety along the Kokoda track.[9] We are forever grateful.

Today, we commemorate the 75th anniversary of the end of World War Two. We remember the jubilation, we honour those who fought and those who provided support, we embrace the camaraderie, and we recognise the tragedy – for us and for those against whom we fought.

It is right that remembrance should transcend national borders because the act of remembrance, in the words of Oxford University philosopher Cecile Fabre, is our testimony to the ‘moral significance of all human beings.’[10]

This week, Her Majesty The Queen approved the posthumous award of the Victoria Cross for Australia to Tasmanian, Ordinary Seaman Edward ‘Teddy’ Sheean, for his actions in the Second World War.

Teddy was killed in action while serving in the region of the Arafura Sea on the first of December 1942, protecting the lives of his shipmates when HMAS Armidale was attacked by enemy aircraft. His actions were truly heroic and serve as a reminder of the sacrifice that was required of many Australians during the Second World War. This is the 21st Victoria Cross for Australia from the Second World War and the 101st in Australia’s history.

It is the first Victoria Cross for Australia that has been awarded to a member of the Royal Australian Navy.[11]

[3] To mark the 75th Anniversary, the stories and interviews of NSW veterans, including of the 6 special guests at this service, are being curated at: https://www.warmemorialsregister.nsw.gov.au/nsw-stories

[4] A Navy order to issue the crew alcohol – beer in the Australian Navy and rum in the Royal Navy:

[10] ‘Remembering Wars: Lest We Forget’ podcast in The Philosopher’s Zone on Radio National which featured Professor Cecile Fabre, Professor of Philosophy, University of Oxford, Author of Cosmopolitan Peace: