The History of the Arcade

Government House has recently completed the restoration of the Arcade ceiling to its original condition. Restoration has removed the 20th Century painted finish to reveal the original timber. 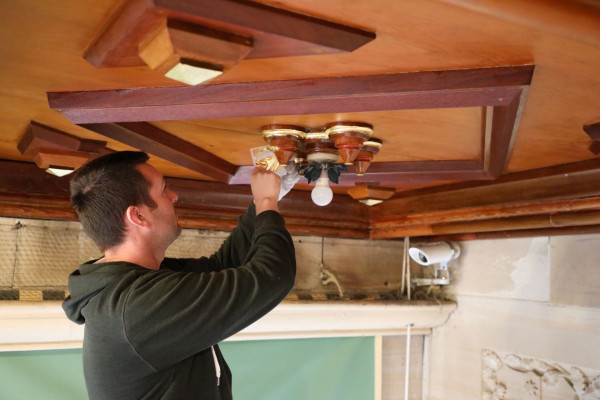 Construction of the Arcade began in 1879, as the term of Governor Sir Hercules Robinson (1872-79) came to an end.  As was customary, in the interim between Governor Robinson’s departure and the arrival of the new Governor, Lord Augustus Loftus, the Chief Justice assumed administration of the Colony - Chief Justice Sir Alfred Stephen.

This changeover presented an opportunity for refurbishment and improvement to the House prior to the new Governor’s arrival.  Sir Stephen suggested improvements to the State Rooms  and also the erection of a “corridor or colonnade along the seafront of the Building”.  Building commenced at once.  Colonial Architect, James Barnet, drew up the plans for the colonnade and directed its construction. 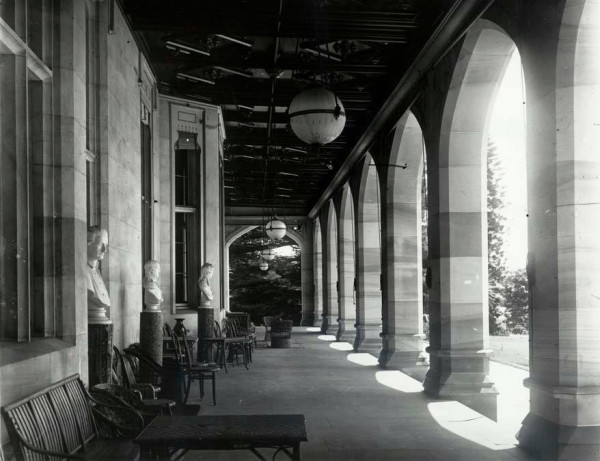 Barnet’s original drawings for this construction refer to the “Arcade”.  However, all subsequent referrals, including those of Barnet, refer to it as a “Colonnade”.  It has also, over the course of time, been referred as the verandah or porch.

Strictly speaking, according to the Oxford Dictionary, an arcade is defined as: “a covered passage with arches along one or both sides” and a colonnade as a “row of evenly spaced columns supporting a roof, an entablature, or arches”.  According to this description, the term 'arcade' was deemed more appropriate and has remained in use since 1996.

At the time of construction of the Arcade, the State Rooms were lavishly redecorated by the firm Lyon & Cottier representing a pinnacle in the decorative evolution of the House.  The Chief Secretary’s Building was also erected in 1879, and the building of the new Government House in Melbourne, which commenced in 1872, added to the impetus to improve Government House Sydney to a higher standard.

Not only was it planned that the new Arcade would protect the interior from heat and sunlight, it would also provide an outdoor entertaining area.  Originally, French doors from the interior to the Arcade were only installed in the Ballroom and Ante-Drawing Room, with the one from the Drawing Room being created later on.  This also resulted in a balcony being created for the private residential spaces above.

The roof of the Arcade was constructed of timber beams with batten rolled, zinc roofing on thick Kauri boarding. 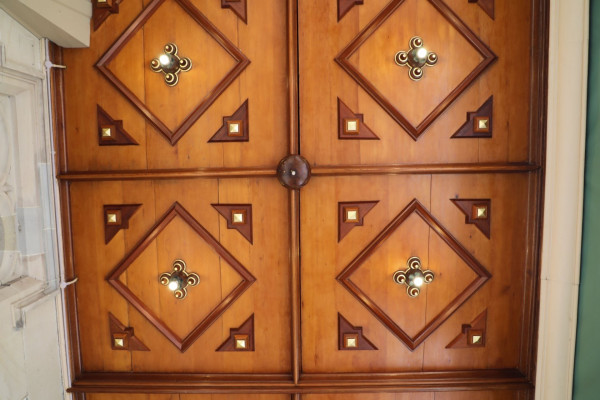 The spacing of the arches proved problematic to achieve views from the windows.  It was therefore necessary to create one pier much wider than the others.  The Coats of Arms of Governors were carved onto these piers and later onto the inside walls of the Arcade.  The pointed arches also have beautifully carved Australian and British plants and flowers as decorative finishes.

In 2010, a trial conservation investigation was undertaken by the Historic Houses Trust of NSW to remove the 20th Century paint layers and reveal the original wooden ceiling. The decorative timber mouldings underneath were found to be Australian Red Cedar.

The full restoration and conservation of the Arcade ceiling has now been completed and the beautiful timber and craftsmanship of the original Arcade ceiling can once again be admired - in all its magnificent glory. 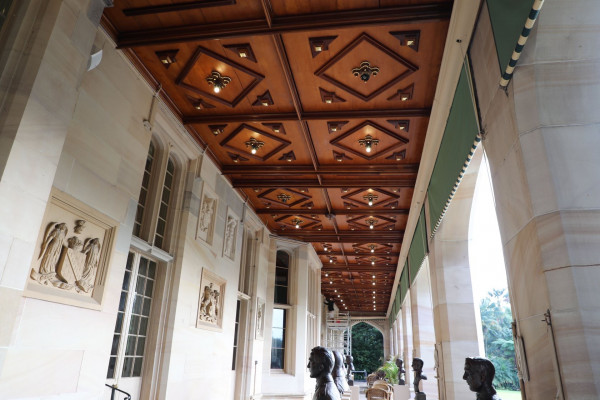