The first Royal Tour to Australia by Her Majesty and the Duke of Edinburgh covered 12 cities and towns of New South Wales, including Broken Hill on 18 March 1954, the last stop of the 1954 Tour, prior to their visit to South Australia. Forty thousand people turned out to welcome the Royal Couple. 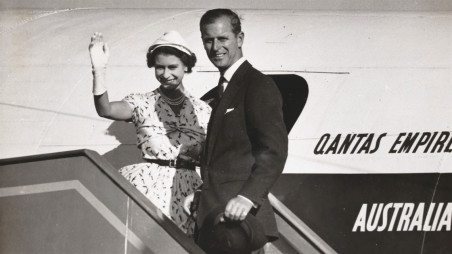 Her Majesty Queen Elizabeth and the Duke of Edinburgh wave a final farewell to New South Wales as they board the Royal Plane at Broken Hill. Photo credit: State Library of New South Wales

The commemorative edition of Broken Hill’s mining publication, The Conveyor, reported the excitement of the Royal visit:

“Then began the Royal Procession, with the Queen driven through the streets in an open convertible Humber Super Snipe … such a flag waving, such a cheering and hand-clapping as old Argent Street had never known ... The people of Broken Hill - they cheered to the very echo. They swept along behind the Royal car, intent on seeing as much of the Queen and Duke as possible. The radio announcer, audibly affected by such a stirring sight, acclaimed the glad, almost incredible fact that 'Our Queen' is driving down our street.”

At an official reception at the North Park (subsequently known as Queen Elizabeth Park), Her Majesty said:

“I do not think that anyone could fly, as I have done today, across the vast stretches of the Australian outback and come to this modern city, built upon the barren reaches of the Barrier Range, without a sense of amazement at the achievement which its existence represents.

The story of how this great mining centre, which has become one of the main springs of Australia's industrial strength, has been built, and equipped for every need of modern life, in the face of every difficulty which nature could devise, is surely one of the most remarkable and romantic in Australian history.” [1]

The Queen was, reportedly, the first woman to be allowed to go underground at the mine and to view operations below the surface. 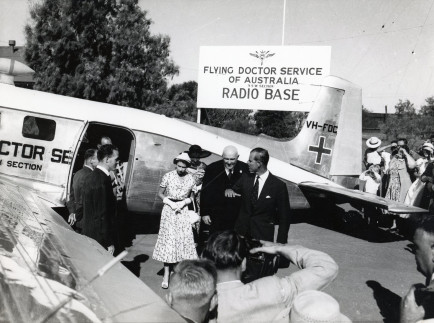 She said: “I have heard so much of the work of the Flying Doctor Service and the security and comfort it brings to every part of the outback.  I express my admiration to all those, past and present, who have contributed to its splendid work.” [2] 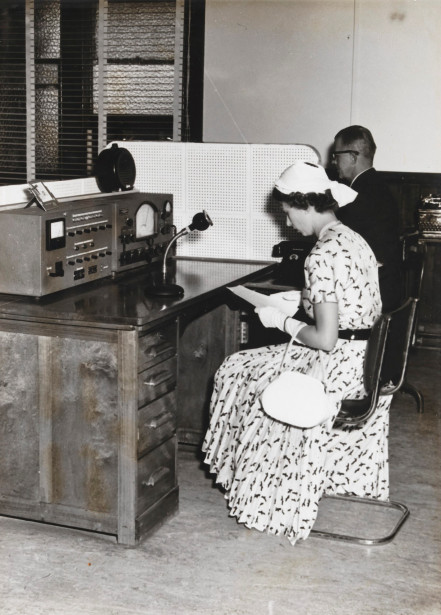 The Queen speaking on air at the Royal Flying Doctor base in Broken Hill, 18 March 1954. Photo credit: State Library of New South Wales

The Queen, also a young mother of two children (Prince Charles was then 5 and Princess Anne, then 3), spoke to Mrs Mitchell, from ‘Muloorina’ station, near Lake Eyre, a young mother who responded on behalf of outback families, outlining the importance of the Royal Flying Doctor Service to those families:

“I am speaking from a wireless transceiver 300 miles from Your Majesty at Broken Hill. We have one child. My family is very isolated, our nearest settlement is 35 miles away.”

In return, the Queen spoke of the fortitude, courage, humour and friendliness of the men, women and children who chose to create homes in the Australian outback.

The ABC reported: “Sheep and cattle station families, boundary riders, well sinkers, drovers and people in outback hospitals and mission stations. Every one of them hung on to the clear words which brought the Queen into their lonely world.” [3]

In memory of this visit, on display at the Royal Flying Doctor Service museum is the 1950s chair on which the Queen conveyed her broadcast, which features gold embossing of her initials. [4]