The 1963 Royal Tour and beyond

Following the first highly successful and lengthy Royal Tour of Australia in February 1954, the Queen conducted another 15 visits to Australia during her long life of service to the Commonwealth. 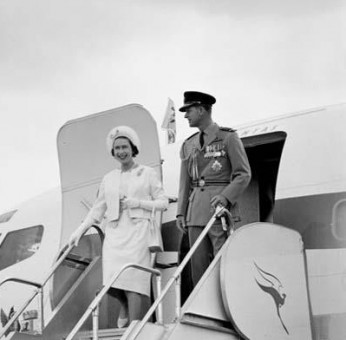 Queen Elizabeth II and the Duke of Edinburgh arriving in Canberra at the start of their 1963 tour. Photo credit: National Archives of Australia

The 1963 Tour in NSW commenced with the Royal couple arriving in Sydney on board the Royal Yacht Britannia from Hobart, to be greeted by Governor and Lady Woodward. During this Tour, Her Majesty attended a Garden Party and conducted an Investiture Ceremony at Government House. She also opened the University of New South Wales’ new Medical School building and toured a Royal Agricultural Society pageant at the Showgrounds. 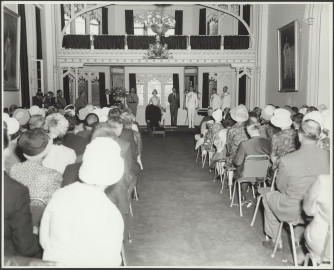 Her Majesty and the Duke of Edinburgh later visited the Snowy Mountains Hydro-Electric Scheme, where they went underground to see the construction of the Geehi tunnel and stayed overnight in Cabramurra, Australia’s highest town.

The 1970 Royal visit featured as part of the bicentennial celebration of Cook’s maiden voyage to Australia, which was traced, in part, by sailing up the east coast, again on board the Royal Yacht Britannia.  The Queen and the Duke of Edinburgh were joined by their eldest children, Prince Charles and Princess Anne. 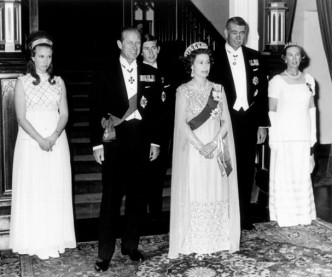 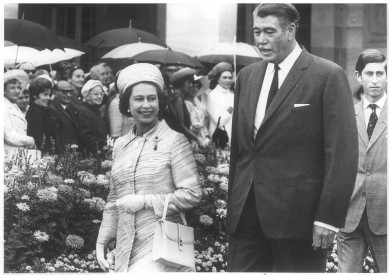 This five-week Tour included visits to Port Kembla, Wollongong, Newcastle and Coffs Harbour, where the Royal Family viewed a banana plantation, forestry projects and a surf carnival, before sailing on to Brisbane. Later in April, the Royal Family visited Armidale, Orange, Richmond, Windsor and Parramatta, where the Queen opened the restored Old Government House at Parramatta Park. 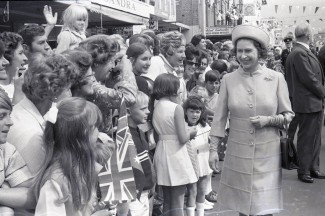 The 1973 Tour saw a spectacular spring day for the opening of the Sydney Opera House on 20 October 1973. Her Majesty declared that the building had “captured the imagination of the world.” She also commented: “the human spirit must sometimes take wings or sails and create something that is not just utilitarian or commonplace.” 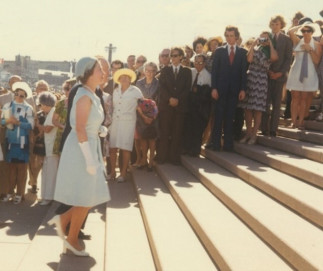 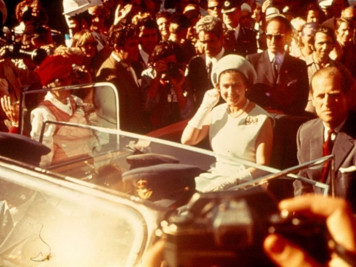 A follow-up visit less than six months later in 1974 saw the Queen open the 29th session of the Australian Parliament, before her visit was shortened by the calling of a snap British election. 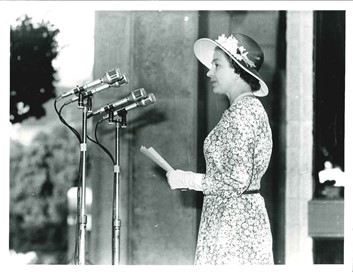 The 1980 Royal Tour included the opening of Bankstown Civic Centre, to mark the declaration of Bankstown as a city, and a Royal Charity Concert at the Sydney Opera House. 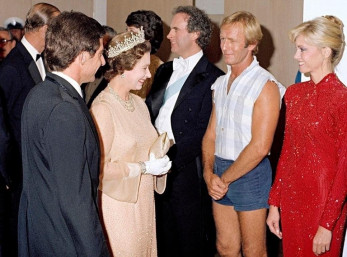 Following a tour of other Australian states in 1981, in 1982, the Queen opened the National Gallery of Australia and Mt Druitt Hospital, before attending a State Reception at Bathurst City Hall.

During a momentous 1986 Tour, Queen Elizabeth II signed the 1986 Australia Act to make Australian law independent of British parliament and courts. During this Tour, Parramatta Stadium was opened. 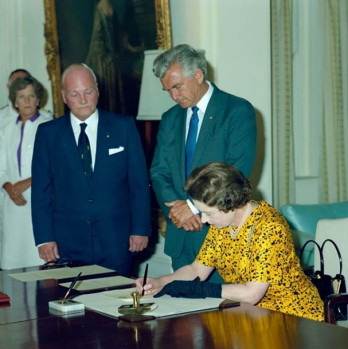 Marking the bicentenary of British settlement in 1988, Her Majesty opened Darling Harbour and the new State Library of New South Wales, attended a Civic Welcome at Albury’s Civic Theatre, before arriving in Newcastle by sea to open the Newcastle’s Regional Museum and the Foreshores Bicentennial Development. During this Tour, Her Majesty also opened the new Parliament House in Canberra.

The 1992 Royal Tour featured the opening of the 50th Parliament of New South Wales, and the unveiling of an oil portrait at Parliament in honour of the 40th anniversary of her Reign. The Queen’s portrait, painted by Mara McGregor, hangs in the Fountain Court of Parliament House. The Queen also invested Dame Joan Sutherland with an Order of Merit at Admiralty House. 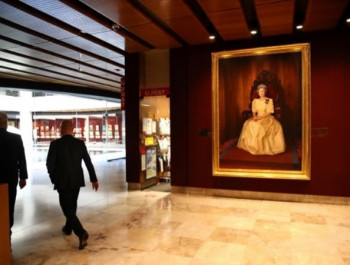 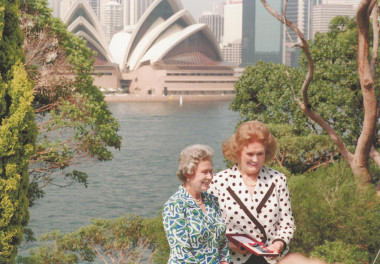 This Tour included 150th anniversary celebrations of the incorporation of the City of Sydney, a Dubbo civic reception and tour of Western Plains Zoo and the opening of the Paddock Grandstand at Royal Randwick Racecourse.

Following a referendum in November 1999, in which a majority of the Australian people voted to retain the Queen as Head of State, in March 2000, Her Majesty made her thirteenth visit to Australia, visiting the Sydney Olympics site, before travelling on to Canberra, Wagga Wagga and Bourke, visiting Bourke Primary School, the Aboriginal/Community Radio Station 2CUZ FM, and attending a civic welcome. 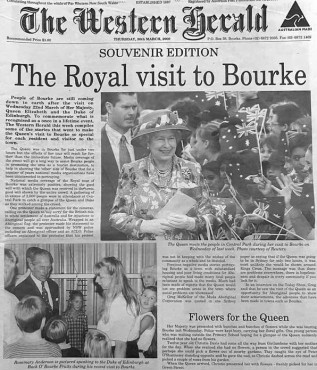 In the first speech of this Tour at the Sydney Opera House, Her Majesty remarked:

“I cannot forget that I was on my way to Australia when my father died. Since then and since I first stepped ashore here in Sydney in February 1954, I have felt part of this rugged, honest, creative land. I have shared in the joys and the sorrows, the challenges and the changes that have shaped this country's history over these past fifty years.

But we must look forward as well as back. Australia has always been a country on the move and will go on being so - it is not for nothing that the anthem is 'Advance Australia Fair'. Whatever the future may bring, my lasting respect and deep affection for Australia and Australians everywhere will remain as strong as ever.”

Her Majesty made return visits to Australia in 2002 to open the Commonwealth Heads of Government Meeting, held in Coolum, Queensland, and in 2006, to open the Melbourne Commonwealth Games. During this tour, she made her final visit to New South Wales, to open the western colonnade of the Sydney Opera House and attend a Commonwealth Day service at St Andrew’s Cathedral. 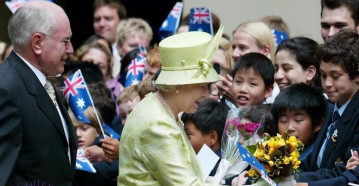 In 2011, the Queen travelled to Canberra, Brisbane, Melbourne and Perth, to open the Commonwealth Heads of Government Meeting. This would become Her Majesty’s ‘farewell tour’ of Australia.

In recent years, the Queen had conveyed messages of support to NSW communities during drought, fires, floods and pandemic. 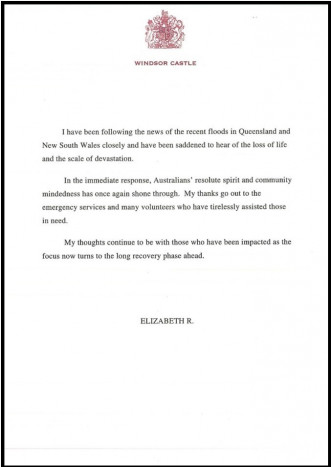 In June 2022, in honour of the Queen’s Platinum Jubilee year, the New South Wales Governor, Her Excellency the Honourable Margaret Beazley AC KC, travelled to London and was received by Her Majesty at Windsor Castle. 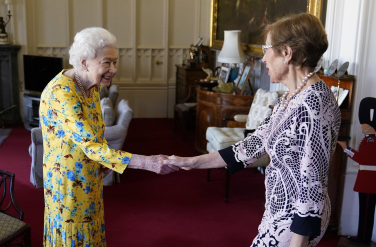