As Queen Elizabeth II and the Duke of Edinburgh stepped off SS Gothic on the morning of 3 February 1954 to a crowd of one million people lining Farm Cove and Sydney streets, The Sydney Morning Herald reported:

“Her Majesty the Queen landed at Farm Cove at 10.33 am [yesterday] and received the most tumultuous greeting Sydney has ever given any visitor. It was an historic occasion, because this was the first time that a reigning monarch had visited Australia.” 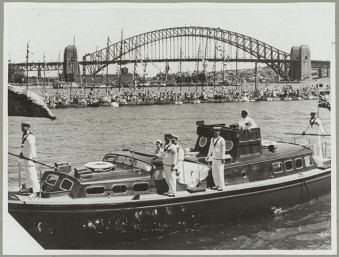 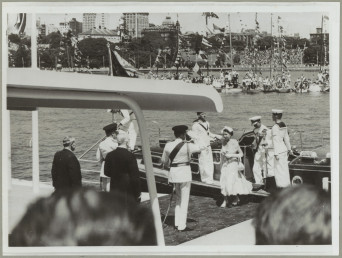 A Royal visit by the Queen's father, King George VI, had been planned for many months. When the King fell ill, a coded telegram sent in October 1951 relayed the news of the suspended visit, which also suggested that the then Princess Elizabeth and the Duke of Edinburgh would, in his place, visit in 1952.

The young princess was en route to Australia and staying at a safari lodge in Kenya when she received the news of her father’s sudden death on 6 February 1952, forcing an immediate return to Britain. Following her coronation on 2 June 1953, Queen Elizabeth II and the Duke of Edinburgh arrived in Australia the following year. 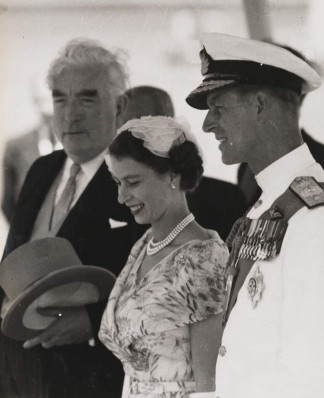 The official greeting was followed by a tour of Sydney city by car where The Queen stopped to place a wreath of white chrysanthemums and red carnations on the Cenotaph bearing the simple inscription: ‘From Elizabeth R and the Duke of Edinburgh.’ 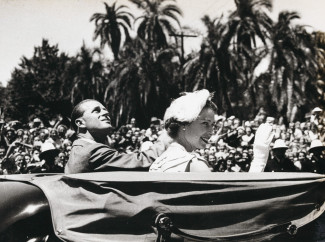 The Royal Couple then travelled to Government House to be greeted by Governor Sir John Northcott KCMG KCVO and his daughter Elizabeth, before inspecting the guard of honour. 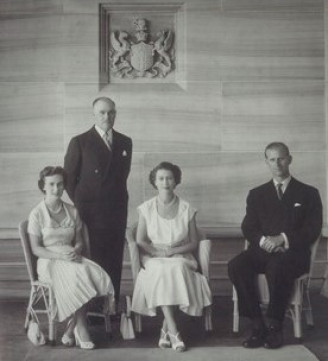 During their time in New South Wales, the Royal Couple attended 28 major programs, including constitutional, ceremonial and community events.  The Queen watched a surf life-saving demonstration at Bondi Beach, addressed 107,000 schoolchildren at three outdoor venues, attended a divine service at St Andrew’s Cathedral, met with war widows, ex-servicemen and women and wards of Legacy, and opened a session of the NSW Parliament. 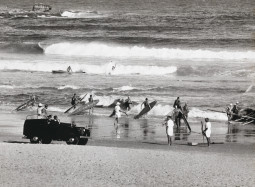 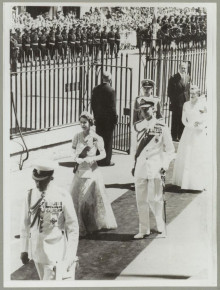 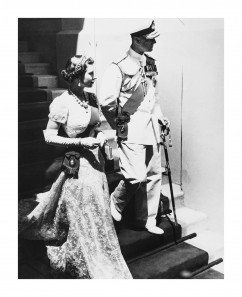 A Lord Mayor’s Ball was held in their honour at the Sydney Town Hall on 5 February and a Garden Party at Government House on 18 February. 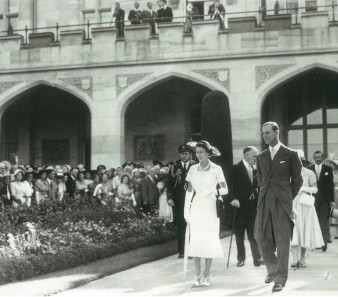 Before leaving Sydney, the Queen wrote a letter of thanks to the then Governor of New South Wales. 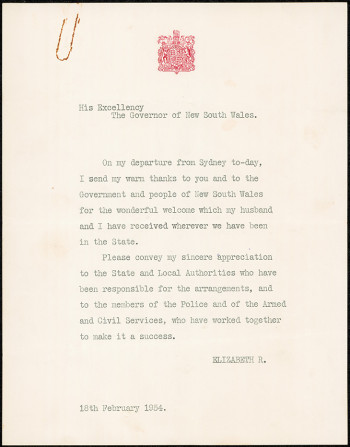 In regional New South Wales, which they covered by plane, train - including Royal Train, and by car, engagements included civic receptions, opportunities to meet ex-servicemen, women and war widows, presentations to schoolchildren, visits to local industry and agricultural shows, and a tour of the Royal Flying Doctor Service. In total, the Royal Couple toured 12 New South Wales cities and towns, including: 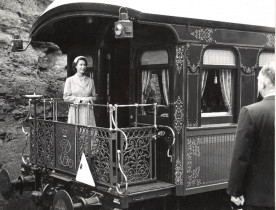 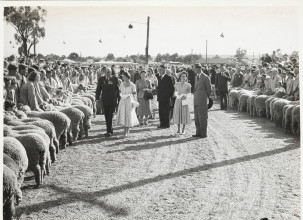 In Broken Hill, which was the final New South Wales stop of their nine-week tour, the Royal couple were officially farewelled by the Governor of New South Wales and the Premier, before travelling on to Adelaide.

The arrival of Her Majesty and the Duke of Edinburgh in New South Wales was the first major event ever organised in Australia, televised at a time when television was not yet common, presaging the modern era of media coverage.

In waving farewell from the deck after departing Fremantle on 1 April, the Queen delivered one final message to Australians:

“We shall always remember the loyalty of your welcome and the joy of your children. I hope that this visit has served to remind you of the wonderful heritage we share … And now I say goodbye. God be with you until next time I can visit Australia.” 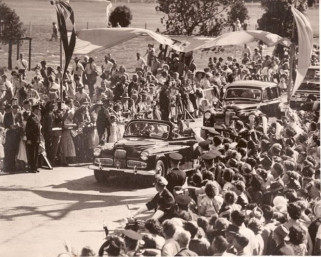